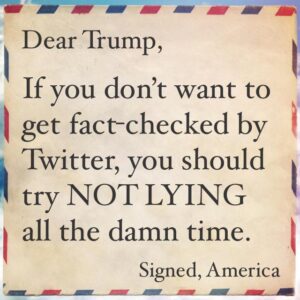 Donald John “Liar in Chief” Trump has issued an executive order that seeks to strike back at social media outlets that seek to do the responsible thing.

They want to fact-check the idiocy — the lying idiocy at that — that pours forth from Trump’s Twitter account.

Trump thinks he is being stifled, stymied, censored. Twitter has announced it intends to issue fact-check warnings on Trump’s messages, given that he, um, is prone to lie through his teeth.

Now that I have mentioned the First Amendment, I need to remind everyone what it says. It declares that Congress shall make no law that inhibits free speech, freedom of religion and freedom to protest the government. It does not mean that someone can spew lies without them being challenged.

Therefore, Twitter is doing what it deems necessary to warn readers of Trump’s tweets that they are not getting the truth from the president of the United States.

Trump is fighting back. He shouldn’t win this fight.

Yes, Donald Trump has 80 million Twitter followers. I am one of them! I get a laugh out of reading his messages, which he says are an attempt for him to avoid the “media middle man.” He wants to talk directly to Americans using Twitter.

I get that. I have no problem with that noble goal.

Except that Trump debases it by lying, with his bullying, by using Twitter to defame others and to spread debunked rumors.

The cure for Twitter taking the watchdog approach is straightforward and oh, so simple: Quit your damn lying!