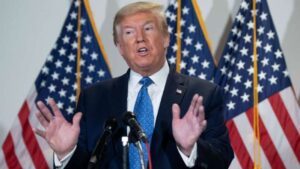 I just cannot stop shaking my head in utter disgust.

Donald Trump continues to exhibit the traits of a disgraceful, despicable lowlife capable of defaming the characters of those with whom he has mere political disagreements.

His latest target happens to be an MSNBC talk show host, Joe Scarborough, a former Republican member of Congress who has since become a Trump critic.

The president of the United States of America has suggested several times openly that Scarborough had a hand in the death of a former congressional aide. Donald Trump has said Scarborough was responsible for the death of Lori Kaye Klausutis. Authorities have debunked anything of the sort.

Trump, though, keeps pitching that scurrilous lie. Not only is he seeking to harm the reputation of Joe Scarborough, Trump is brining untold suffering and pain to Klausutis’ family. Her widower has called on Trump to cease and desist. So has Utah GOP Sen. Mitt Romney, who has said “enough already” with the defamatory rhetoric.

When reporters ask Trump about the lie he keeps fomenting, he falls back on that lame “many people have said” defense.

To think, therefore, that this piece of sh** politician managed to get elected to the highest office in the land and that the individual masquerading as our head of state is continuing to conduct himself in such a reprehensible manner … while he should be focused exclusively on putting down a global pandemic that has killed 100,000 Americans.

Lori Kaye’s husband, T.J. Klausutis, has asked Twitter to take Trump’s tweets down. “I’m asking you to intervene in this instance because the President of the United States has taken something that does not belong to him — the memory of my dead wife — and perverted it for perceived political gain,” he wrote in a letter to Twitter. To date, the social medium has not done so, but it has put warnings out about the lies that Trump keeps fomenting.

Donald Trump is sickening in the extreme.

One thought on “What kind of lowlife would do this?”