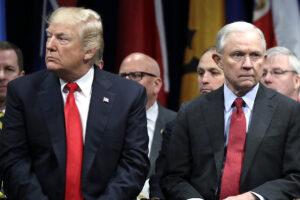 I can’t believe I am saying this, but I actually am in Sessions’ corner as he fights back against the idiocy that comes from Trump.

Sessions is running in the Republican primary in Alabama for the U.S. Senate. Sessions was a senator from ‘Bama before Trump selected him to be AG.

Sessions was a big man in the Trump presidential campaign. He had connections with, um, Russians who then attacked our electoral system in 2016. Then came questions about whether the Trump team “colluded” with the Russians. There was no way Sessions could investigate his own role in connection with those allegations, so he backed away. The Justice Department appointed Robert Mueller to lead the probe … and that ticked Trump off royally.

Trump has been accusing Sessions of destroying people’s lives by recusing himself and allowing Mueller to conduct the probe. Sessions, though, responded that Trump should be “grateful” he followed the law.

Trump is having none of it.

Still, Sessions is on the right side of this dispute. He did what DOJ policy required of him. He followed the law!

Of course, following the law is a sign of betrayal according to Donald Trump, who has only a passing interest in doing the right thing.

Don’t misunderstand me on this point: Jeff Sessions is not my preferred pick to sit in the U.S. Senate; I didn’t support his selection as AG. However, he took the correct course in recusing himself from the Russia collusion investigation. For him to be pilloried by Donald Trump because he “followed the law” is reprehensible on its face.

Thus, I am glad to see Sessions fighting back.