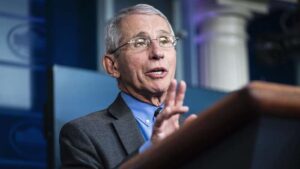 Dr. Anthony Fauci testified this week before a Senate committee on the fight to quell the coronavirus pandemic that has killed 85,000 Americans.

Then came a series of questions from one of Donald Trump’s toadies on the panel, rookie Republican Sen. Kelly Loeffler from Georgia, who wanted to know if Fauci felt tension between himself and the president. Fauci said “no,” that he doesn’t believe he and Trump are at odds.

Then something else happened later in the day. Donald Trump contradicted something Fauci had said about the wisdom of letting children back into school classrooms this fall.

So … yes, Trump and Fauci are at odds. Got that? I want to stand with the nation’s premier infectious disease expert over the bloviations of a cheap huckster who masquerades as president of the United States.

Senators asked Fauci whether children should be allowed back into classrooms this fall. He balked at the suggestion, saying it would be premature to open classrooms to students if the virus isn’t contained.

What did the Carnival Barker in Chief say about Fauci’s response? He was “surprised.” He said Fauci seeks to play to all audiences. He said Fauci’s answer to the Senate panel was “not acceptable.”

Where I come from, that looks and sounds like a dispute between two principals involved ostensibly in a fight against a common enemy.

Where does Fauci go from here? Does he quit? Does he walk away from the president’s pandemic response task force? No. He shouldn’t.

Fauci is nearly 80 years of age. He has worked for every president of both political parties dating back to 1984, when he was hired by President Reagan to take the lead on HIV/AIDS research. His credentials are beyond reproach. Fauci is an expert on infectious disease and the pandemic response team needs his reasoned, rational, scientific approach.

Indeed, this man’s wisdom stands in the starkest contrast possible to the bloviating bullsh** that flies incessantly out of Donald Trump’s pie hole.

I am one American who wants Fauci to remain on the job looking out for us. What’s more, I am as certain as I am sitting here that he knows beyond a doubt that he is working for a moron.

It’s just too damn bad he cannot say it out loud.

One thought on “Listen up, Dr. Fauci: Trump is fighting you”