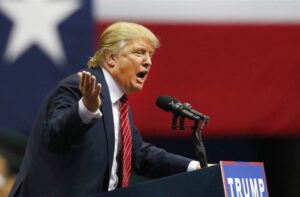 I was given a crash course while working as a young reporter in Oregon on what it means to have proper “judicial temperament.”

My editor assigned a story that allowed me to look into the bench conduct of a Clackamas County trial judge. We had heard of complaints leveled against this judge and my editor set me on a course to determine the veracity of the complaints. They were mostly true, so I wrote the story and the newspaper published it.

I am trying to transfer the issue of judicial temperament to a discussion I don’t hear much these days while the nation discusses the presidency of Donald Trump.

The more I watch this individual flail and flounder under the pressure of the coronavirus pandemic, the more convinced I become — as if I needed any convincing — that he lacks “presidential temperament.”

Proper judicial temperament, I learned, includes traits that enable a judge to treat litigants and their legal counsel with courtesy, to treat witnesses with respect and to honor the service of jurors who are tapped to sit in judgment of their peers.

The judge I examined in the late 1970s exhibited little proper judicial temperament. The president we are examining today demonstrates next to zero presidential temperament.

The viral infection has killed more than 54,000 Americans. We don’t know where the death toll will end. Donald Trump cannot, or will not, demonstrate the kind of empathetic understanding one expects from our president.

His leadership qualities produce waffling, changing of mind, mixed messaging. In the span of 24 hours, Trump went from praising the Republican governor of Georgia for his decision to lift restrictions brought by the pandemic to criticizing him acting too hastily.

His continual excoriating of the media reveal an amazing immaturity in a president who doesn’t grasp what all of his predecessors have understood, that the media’s job is to hold government officials accountable for their statements and deeds.

Donald Trump lacks knowledge at every level of this pandemic. He mused aloud this past week about whether we could kill the virus by allowing individuals to ingest “disinfectants.” When the pandemic broke out, he boasted about the then-total of 15 cases vanishing to zero “like a miracle.”

Trump is the most untrustworthy man ever to occupy the presidency. His incessant, relentless lying provides all the proof anyone needs.

If we’re going to demand that a president exhibit the proper temperament to lead a nation — particularly now when its citizens are frightened by an “invisible enemy — then we have to examine the fundamental lack of presidential temperament exhibited repeatedly by Donald John Trump.