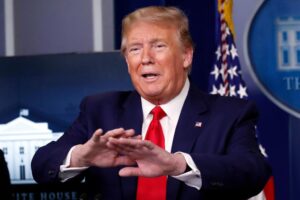 He is signing an executive order that bans for 60 days all immigration into the United States, except for those with temporary work visas. Trump says he wants to prevent the spread of the coronavirus that has killed more than 45,000 Americans.

Sure thing, Mr. President, except that the virus is not being “imported” by immigrants. The overwhelming number of new infections is coming from right here at home, which tells me that that the executive order was issued more than just a tad late in the game.

What’s more, the announcement came — as usual — via Twitter. Trump got into a late-night fidgety spell and blasted out the tweet reportedly without consulting immigration officials, the National Security Council, the FBI or the Department of Homeland Security. Gosh, isn’t it essential that you notify the appropriate agency heads of such drastic matters before you make the public announcement?

Trump’s anti-immigration stance is well known. It’s not just the folks who are sneaking in here illegally that has drawn his ire. He wants to clamp down as well on legal immigration. You know, he doesn’t like all that inbound traffic from what he calls “sh**hole countries,” meaning countries from, oh, Africa and Latin America.

The temporary immigration ban is nothing more than another example of Trump pandering to his base.