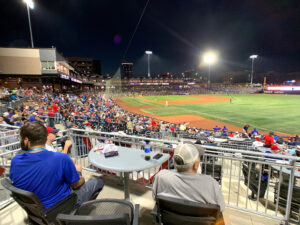 This story saddens me at a level I never thought I would experience. It comes from The Associated Press and it portends a grim short-term future for minor league baseball across a nation that is caught in the grip of the coronavirus pandemic.

Listen up, my friends in Amarillo, you fans of the Sod Poodles who had hoped to be flocking to Hodgetown — the city’s shiny new ballpark —  to cheer on the defending Texas League champions.

AP reports that minor league baseball experienced a 2.6 percent attendance increase in 2019. Minor league ball had more than 40 million fans for the 15th straight season, according to AP.

The 2020 season hasn’t started. There’s no prospect on the horizon when it will start, unlike what’s happening with Major League Baseball, where team owners and the players union are working on a schedule that would commence with no fans present in the stands. The AP reported:

While Major League Baseball tries to figure out a way to play this summer, the prospects for anything resembling a normal minor league season are increasingly bleak.

For minor league communities across the country from Albuquerque to Akron, looking forward to cheap hot dogs, fuzzy mascot hugs and Elvis theme nights, it’s a small slice of a depressing picture.

Yes, you can include Amarillo in that roster of minor league cities. Amarillo fought hard to lure the Sod Poodles from San Antonio. The team’s initial-season success in 2019 was one for the books. It was epic. The fans can’t wait for the first pitch.

Then came the COVID-19 crisis. Every single sporting league is shut down. That includes the plethora of minor leagues scattered.

When will they play ball? When will it be safe to cram fans into ballparks, sitting next to each other, allowing them to high-five and cheer when the home team scores a run or makes a spectacular play in the field?

Uhh, who in the world knows?

At this moment, it doesn’t look good. We might be in for a lost season.