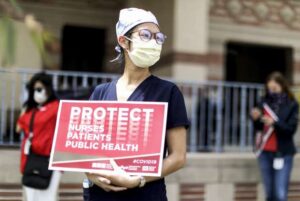 Donald Trump sought Monday to turn a White House “briefing” on the coronavirus pandemic into a campaign pitch for his re-election.

To their credit, two major cable news networks — CNN and MSNBC — decided that viewers did not need to see a propaganda video in place of what was supposed to be an analysis of the federal government’s response to the worldwide health crisis.

Fox News, of course, stayed with it, no doubt to Trump’s pleasure. That’s their call.

I want to applaud CNN and MSBNC for exhibiting sound news judgment in deciding that Trump’s self-aggrandization should not be part of a sober assessment of a health crisis that has killed more than 20,000 Americans and sickened more than a half-million of us; and be sure, those numbers might be far fewer than the reality, given the shocking shortage of testing equipment to determine the actual infection rate.

You can take this to the bank as well: Donald Trump is going to ramp up his war against what he labels falsely the “fake news media” outlets that refuse to pander to his every wish.

He doesn’t grasp — or refuses to grasp — the principle behind a “free press.” The principle that he ignores is that the media do not work for him; they work for the public.

That likely won’t stop the Imbecile in Chief from going ballistic against the media who, I hasten to add one more time, are just doing their job.