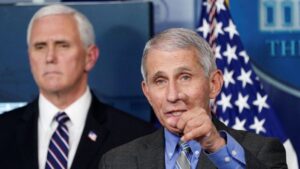 You have pettiness … and then you have Vice President Mike Pence.

The VP, who heads the Trump administration coronavirus pandemic response task force, has issued the strangest decree I can imagine.

He has ordered Drs. Anthony Fauci and Deborah Birx — the task force’s preeminent medical experts on infectious disease — to stop appearing on CNN. Why? Because the network has chosen not to cover the entire task force briefings, which almost daily devolve into a campaign riff Donald J. Trump.

The president says nothing of importance at these briefings. Fauci and Birx, though, do offer expertise and knowledge of the fight in which we are engaged. CNN has chosen to report later what the principals say rather than covering them live.

If the briefings concentrated exclusively on the medical issues and if they focused more on the doctors than on the president, I could understand covering these events fully in real time. They don’t. They  become a forum for Trump to lie, to misdirect, to criticize others for the failings of his administration’s response to the pandemic.

CNN is not the only major media outlet to cease airing the briefings in their entirety. As Yahoo.com reported:

The New York Times, another outlet that has been a target of the Trump administration’s ire, stopped airing the briefings on its website entirely.

“We stopped doing that because they were like campaign rallies,” Elisabeth Bumiller, the paper’s Washington bureau chief, told the Washington Post. “The health experts often have interesting information, so we’re very interested in that, but the president himself often does not.”