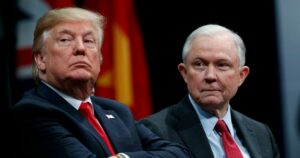 This is a political story I don’t recall ever seeing … until now.

Donald Trump’s presidential re-election campaign has told U.S. Senate candidate Jeff Sessions to cease saying that he’s a 100-percent Trump supporter as he campaigns for election to the Senate from Alabama.

You see, Sessions once served as attorney general in the Trump administration. Then he recused himself — properly, in my view — from any active role in the “Russia thing” involving allegations of collusion with Russians who were interfering in our 2016 presidential election. He enraged Trump, who fired him.

Sessions had served previously in the Senate. He was the first senator to endorse Trump. He and Trump were joined at the hip.

That was then. The seat he once occupied is now filled by Democratic Sen. Doug Jones. Sessions has been declaring how much of a Trump fan he remains. The president is having none of it. He wants Sessions to stop using the Trump name in his campaign ads.

Trump’s campaign says the president does not favor Sessions’ election to the Senate. He has backed Tommy Tuberville, a former college football coach at Auburn and Texas Tech.

I just want to note that none of the Sessions ads I have seen has said a word that declares that Trump wants the former AG back in the Senate, only that Sessions is with Trump all the way.

Hmm. I guess the grudge-bearing president wants to make a point that one would figure he wouldn’t need to make.