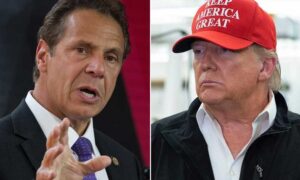 I know this happens to all of us. We hear someone offer an analysis of an important issue and we think: Dang, I wish I said that!

Thus, I cannot take credit for a thought I want to pass along on this blog. It came from Lawrence O’Donnell, an MSNBC talking head as he concluded an interview with New York Gov. Andrew Cuomo.

Cuomo has emerged as a serious superstar as he briefs the nation of the trouble his state is enduring from the coronavirus pandemic. New York has become the latest epicenter of the crisis around the world. Cuomo has been a giant of reason, of calm, of knowledge and of confidence as he has talked about the challenges he faces daily while his constituents are becoming and are dying from the virus.

On the other hand …

We have the president of the United States, Donald Trump, who’s been haphazard, incoherent, vacillating, confused and confusing as he tries to bluff his way through what the federal government response has been to date.

O’Donnell wanted to congratulate Cuomo for his leadership. He did so by telling us all that the difference between Cuomo and Trump is that the governor has spent the vast bulk of his adult life in public service; Trump spent his entire adult life — prior to becoming elected president — seeking to enrich himself.

Therein, said O’Donnell, lies the difference. Cuomo worked for his father, the late Gov. Mario Cuomo; he worked as housing secretary in the Clinton administration; he has served as New York attorney general and now as governor.

Trump parlayed a multimillion-dollar stake from his father into building a real estate business. He has launched several failed enterprises, declared bankruptcy several times, played host to a reality TV show, owned and managed beauty pageants … all while exhibiting boorish conduct that is still on display even while he serves as president of the United States.

You want a juxtaposition that explains it all? There it is.

I wish I had said it first. I didn’t. Thanks for saying out loud, Lawrence O’Donnell, what many of us have thought all along.