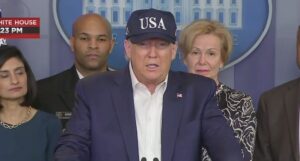 I am not the least bit interested in hearing Donald John Trump tell us what he “thinks” or “believes” about the coronavirus pandemic. I am intensely interested, though, in hearing from medical and scientific experts about the data they analyze and what their expertise tells them about what the data reveal.

The president keeps taking the microphone at those daily White House briefings. Having told you already that I don’t listen to him blather on in the moment, I am left to read about what he says later in the day. And he keeps yapping and yammering about what he thinks is going to happen or whether he believes that hospital officials need all the respirators they are seeking.

The president needs to step out of the way and let the experts talk to the nation and the world about what they know, not what they think or believe.

Dr. Anthony Fauci appeared on “Good Morning, America” today and offered stark, level-headed analysis of the crisis that is developing. GMA co-host George Stephanopoulos noted that Fauci has served six presidents since 1984 and has emerged as the nation’s premier infectious disease specialist. He never fails to deliver the facts in a calm, reassuring way … even when they reveal grim news, as they did today, Stephanopoulos said.

My message once more to Donald Trump? Stop talking.