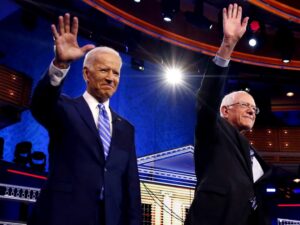 I hereby endorse the notion that all joint appearances with presidential candidates occur without audiences.

Tonight we heard from former Vice President Joe Biden and U.S. Sen. Bernie Sanders. They went after each other at times with vigor and even a bit of annoyance at what the other guy was saying.

However, there was none of the cheering, jeering, hooting and hollering we hear too often from audiences. CNN, which played host to the debate, shunned the audience. The network moved the debate from Arizona to its New York studio; the change was made because of the coronavirus pandemic and the threat of potential exposure to audience members.

In the process, CNN has served the cause of serious discussion among presidential candidates. Biden and Sanders didn’t fire off applause lines … because there was no one in the room to applaud.

Let’s have more of these kinds of political events.