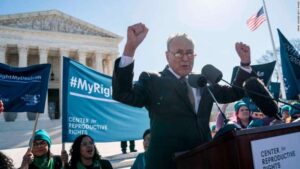 “I want to tell you Gorsuch. I want to tell Kavanaugh. You have released the whirlwind and you will pay the price. You won’t know what hit you if you go forward with these awful decisions.”

They were taking part in a Supreme Court hearing on a controversial abortion case out of Louisiana. Gorsuch and Kavanaugh, of course, are two justices nominated by Donald John Trump and approved after bruising confirmation battles in the Senate; Schumer opposed them both.

Sen. Schumer is wrong to threaten these justices. Chief Justice John Roberts took the unusual approach in rebuking the Senate leader, calling the threats leveled by Schumer “inappropriate” and “dangerous.” Yes. They are.

Justices Gorsuch and Kavanaugh aren’t my favorite members of the nation’s highest court. I want them to rule the right way on this case and I want them to preserve a woman’s right to control her own body. However, Sen. Schumer has stepped way over the line that separates the legislative and judicial branches of government.

Schumer needs to pipe down and let these justices do their job without that kind of intimidation.