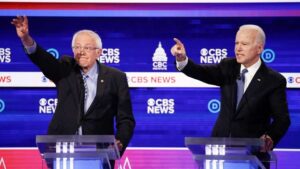 This is one of the many things I don’t understand.

U.S. Sen. Bernie Sanders is now accusing the “Democratic establishment” of conspiring to defeat his bid to win the party’s presidential nomination, that it favors Joe Biden, whose Super Tuesday blowout across the South has inflicted serious injury to the Sanders campaign.

I don’t get where Sen. Sanders gets that.

Biden’s victory was fueled in two parts by African Americans.

Indeed, do I need to remind everyone that the Democratic “establishment” was calling two weeks ago for Biden to step aside? He had performed dismally in Iowa and New Hampshire. Then came Nevada. He was considered the equivalent of political road kill. Leading Democrats wanted him to bow out, to go away quietly, to cede this fight to the next generation.

Now that Biden has breathed new life into his campaign he becomes a tool of the establishment? That’s what Sanders wants us to believe? C’mon, man! Sen. Sanders is concocting a conspiracy theory where none exists.