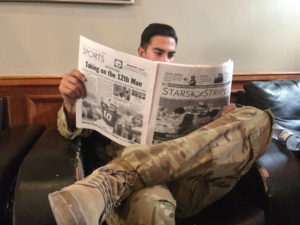 Donald John Trump keeps yammering about how much he cares about the men and women who serve in the military, doing duty that he couldn’t fit into his own life when he was of the age to fight for his country.

Why, then, is the Pentagon — under the current president’s watch — stripping Stars and Stripes of the government subsidy on which it relies to provide news and other information to our military personnel?

Stars and Stripes, which has been published regularly since World War II, is losing its $8 million annual subsidy, ostensibly so the Pentagon can spend that money (which amounts to chump change in the total spending accrued by the agency) on other projects.

As Stars and Stripes reported: “Every day in my office as commander of U.S. European Command, I would read Stars and Stripes,” said retired Adm. James Stravidis, who served as EUCOM chief and NATO Supreme Allied Command from 2009 to 2013. “It was an invaluable unbiased and highly professional source of information which was critical to me in my role overseeing U.S. military throughout Europe.”

Allow me to join Adm. Stravidis in declaring my own intense interest in Stars and Stripes. Many of us serving in Vietnam came to rely on the newspaper to tell us of what was happening back home. We also had Armed Forces Radio, but to those of us who preferred to read the printed word, Stars and Stripes served as a sort of lifeline to the “The World.”

Are we now being led to believe that our young men and women no longer get to read the news that Adm. Stravidis said kept him informed just a few years ago?