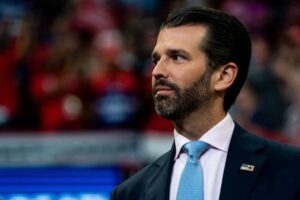 I practically choked on whatever it was I might have been munching on the moment I read what Don Trump Jr. had said about Sen. Mitt Romney’s history-making vote in the Senate impeachment trial of Don’s dad, the current president of the United States.

Romney became the first senator in U.S. history to cast a vote against a president of his own party; the Utah Republican voted “guilty” on the charge that Daddy Donald abused the power of his office by soliciting a foreign government for personal political assistance.

Don Jr. said Sen. Romney, for voting his conscience and trusting in God to assure fidelity to the oath he took as a Senate juror, should be “expelled” from the Republican Party.

Yep, the No. 1 presidential grifter said that Romney, the party’s 2012 presidential nominee, should be kicked out of the party because he dared to honor the oath he took to be an impartial juror and to render justice according to what he understood to be his solemn responsibility.

I hasten to note that Mitt Romney has contributed more to the Republican Party — through his term as governor of Massachusetts and as an ongoing advocate for mainstream GOP policies — than Don Jr. or his father, for that matter, ever will contribute.

For a man who’s profited materially from his father’s business interests and in recent times his political standing to call for the expulsion of an actual Republican with serious policy chops is beyond reprehensible.

I get that Junior is angry. Fine. Keep it to yourself, chump.