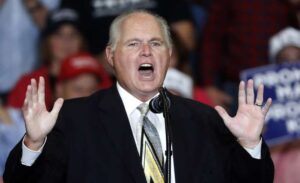 I have stated my share — maybe more than my share — of disagreements with Rush Limbaugh over the years.

I won’t go there today.

Limbaugh is arguably the most well-known radio political talk show host in the United States. He announced today he has “advanced lung cancer.” He is taking some time off the air but vows to return soon to continue his ultra right-wing commentary on the issues of the day.

It would be my hope that all of us, even those of us who do not listen to Limbaugh, could set aside our political differences. I want to wish this fellow well as he fights this hideous disease.

Many of speak of a return to political civility. Limbaugh isn’t one of them. He rants, rails, vents and bloviates at everything and everyone with whom he disagrees. Were he to read my blogs, he would level his invective at me as well.

This isn’t the time to rant. It is a time to understand that the United States of America is a beacon for those who seek to speak their mind. They are unafraid of those who oppose them, just as they welcome those who favor them.

I want to salute Rush Limbaugh for his fearlessness. It’s an American tradition.

I wish Rush well. I want him back in the game. I want him to continue offering his world view just so I can continue to disagree with him … respectfully, of course.