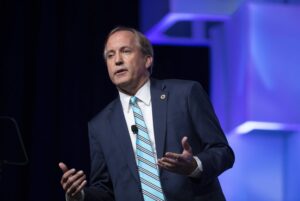 Texas Attorney General Ken Paxton has sworn an oath to defend, among other things, the U.S. Constitution, which Texans still must obey under the law.

The Constitution, as interpreted by the U.S. Supreme Court, has an equal-protection clause that says all Americans are entitled to be treated equally. That means gay couples, men and women, who choose to marry some of the same gender.

So, when a justice of the peace refuses to follow the law, gets sanctioned by the Texas Commission on Judicial  Conduct, and then gets sued by the JP for allegedly violating her religious liberty, then the AG is bound by law to defend the TCJC. That’s how I read it.

Oh, no. He is siding with the justice of the peace, Dianne Hensley, for refusing to preside over same-sex marriages, citing her religious convictions, which endorse only marriages between one man and one woman.

But wait! The SCOTUS has determined that gay marriage is legal in this country. That includes Texas, doesn’t it? Aren’t we part of the United States of America, the nation governed by a secular Constitution?

I am all in favor of religious liberty. This is just my interpretation, though, but I always have considered religious liberty to have boundaries. People are free to worship as they please, or not worship a deity. Religious liberty grants them that right. However, public officials who take an oath to follow the laws of the land have responsibilities to adhere strictly to that oath.

The JP is wrong to deny marrying individuals on the basis of their gender. The AG is wrong to refuse a legally constituted state agency that has ruled appropriately against the JP.