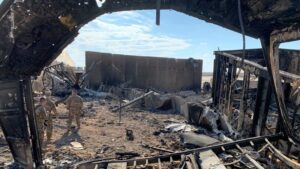 What’s going on at the Pentagon?

The Iranians fired ballistic missiles at our forces in Iraq in response to our killing of Qassem Soulaimani, the head of Iran’s Revolutionary Guard. Hey, this was a bad dude, a ruthless terrorist chieftain.

The missiles landed on our base. The Pentagon and Donald Trump said immediately there were zero U.S. casualties.

Wait! Then the number rose suddenly to 34 service personnel. The brass said they suffered traumatic brain injury when the missiles blew up.

Now we hear the number has reached 50 military personnel.

Is this how it goes now? The public gets information handed out in dribs and drabs.

We all are grateful that none of the injuries is life-threatening. Most of the personnel who were injured have returned to duty.

This sloppy information release seems all too common in an administration that simply cannot seem to get its story straight the first time.

The men and women who serve us — as well as their families who pray for their safety while they stand in harm’s way — need to know the whole truth all the time.