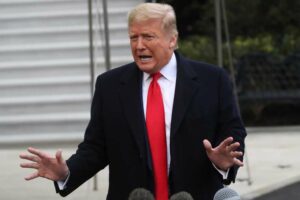 You see, he has this book coming out that alleges that the current president of the United States conditioned specifically the withholding of military aid to Ukraine on the launching of an investigation into Joe and Hunter Biden.

Democrats now are insisting in even more vigorous terms that Bolton be summoned to testify before the Senate trial that is underway to determine whether Trump should be kicked out of office. The House has impeached him on grounds of abuse of power and obstruction of Congress.

If Bolton gets to talk openly and under oath to senators, then some folks believe this might be the testimony that could pry Republicans loose from their loyal support of Donald Trump. I wish I could join them in believing as much. I am afraid that Trump’s death grip on the GOP is as tight as ever.

It is an amazing transformation of a once-great political party.

If Bolton’s testimony is somehow kept out of the Senate record, then he will be able to publish his book, share to the world what he reportedly has written. Donald Trump will continue to deny that he said what Bolton has alleged … although I am unwilling to believe a single word that comes out of POTUS’s mouth.

I do agree, though, that Bolton has detonated a bomb.

It remains to be seen, though, whether it inflicts any serious damage to the man who is defending himself against those who have accused him of high crimes and misdemeanors.