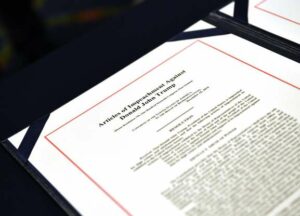 My quest for fairness compels me to wonder aloud: Given that this blog — published by me — has insisted that U.S. Senate Majority Leader Mitch McConnell is unfit to sit as a “juror” in the trial of Donald John Trump, might there be a case to be made against the four Democratic senators who are running for president?

McConnell has said he won’t be an “impartial” juror, even though he took an oath to deliver impartial justice in the Senate impeachment trial of the current president of the United States.

What about the individuals who are running for their party’s nomination to oppose Trump in the November election? Sens. Elizabeth Warren, Bernie Sanders, Amy Klobuchar and Michael Bennett have made up their minds on how they intend to vote when they get the order to cast their vote. They will vote to convict Trump. Period.

I can think of a few other Republicans as well who’ve said they have made up their minds, that they don’t need no witness testimony or evidentiary documents. Lindsey Graham? Ted Cruz? John Kennedy? Give me a break.

However, this pre-judging disease spreads across the aisle.

The four Democrats have staked out their views already. Sure, they insist on witnesses and documents. It remains to be seen whether they’ll get ’em. It’s beginning to look to me as though the fix is in. Republicans who comprise most of the 100 Senate seats aren’t likely to admit witnesses, even though they have plenty to offer.

The four contenders for the Democratic Party presidential nomination, though, need to think long and hard whether they are any more qualified to serve with impartiality than the Senate majority leader who’s admitted he will do nothing of the sort.