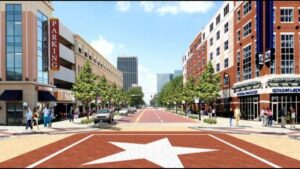 AMARILLO, Texas — I thoroughly enjoy returning to this city, where my wife and I lived for more than two decades.

We arrived here in early 1995 and found a city with a boarded-up downtown, buildings were empty, there was little life to be found. The community had allowed its retail activity to vacate the downtown district to malls large, medium and small to points hither and yon.

We returned here on our latest visit to find — as we have noticed on previous visits to the Texas Panhandle — a city that is bearing a decreasing resemblance to the community my wife and I discovered when he first set foot on the Caprock.

Yes, much work remains to be done. The Barfield Building — the once-rotting hulk of a structure at the corner of Sixth Avenue and Polk Street — is still under reconstruction. I hear the building will open this spring as a boutique hotel. All I was able to notice today were all the windows that had been re-paned and the construction crews scurrying around the grounds.

All along Polk Street — the city’s one-time main drag — I noticed storefronts that once stared at the street blankly that are alive with activity.

We had lunch at a new pub downtown, next to an after-hours spot that had relocated from across the street. Meanwhile, the former site of the after-hours joint is being remade into something else.

To be sure, I did notice a blemish or two in downtown Amarillo. The Family Support Services building on Polk has been destroyed by fire. The city has cordoned off the entire block.

The Globe-News building on the outskirts of downtown sits blank, vacated. The sight of that structure now devoid of life breaks my heart, as I spent nearly 18 mostly enjoyable years there pursuing my craft as the G-N’s editorial page editor.

On the north edge of downtown sits the Herring Hotel. It is still vacant. I cannot yet confirm this report, but I’ll offer it anyway: I have heard from two sources that the Herring might be given new life — possibly soon — with the purchase of the building by a hotel developer. This isn’t the first time I have seen this sort of glimmer from the once-glorious structure. Let us hope that it comes to pass and that the buyer — if the deal is consummated — is the real thing.

I remain hopeful that Amarillo’s future will continue to brighten as it keeps working to restore the heart of the city.

I don’t believe I am overstating what my wife and I saw when we first arrived. We saw a city with a downtown that need a sort of urban renewal life support. What we have seen on our most recent visit is a downtown district that is breathing on its own.

It makes me so very happy.