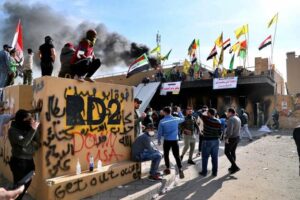 Conservative media have begun the counterattack against those who are questioning the wisdom of Donald Trump’s decision to kill the Iranian Revolutionary Guard leader. They are saying that liberals want to coddle terrorists. Why? Because they wonder whether the commander in chief is steady enough to handle what many fear is the inevitable response from Iran over the air strike.

Qassem Sulemaini is dead. I haven’t heard a single skeptic say that the revered Iranian military leader should still be alive. I, too, believe the guy needed to die and I am glad our forces struck down the leader of forces responsible for the deaths of hundreds of American service personnel.

However, there is legitimate concern about whether the commander in chief has given thorough consideration about how he intends to respond to the retaliation that many fear is coming from Iran. Such concern does not suggest any softening of U.S. resolve in the fight against international terrorist organization. It speaks instead to concern about the preparation at the highest level of our military command for what comes next.

By “highest level,” I refer to the individual in charge of it all, the current president of the United States.

We all have witnessed too many instances of acting on impulse. Trump orders military action without consulting with the Joint Chiefs of Staff or with his national security adviser. He makes decisions based on phone chats with hostile foreign leaders.

None of us knows the pre-strike planning that went into this raid. I happen to be glad that Suleimani is dead. Many of us have legitimate concern about whether we’re prepared for how the Iranians will respond. That does not mean anyone is more concerned about the bad guys than they are about protecting American lives.