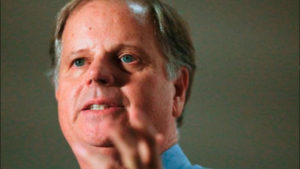 I wrote once on this blog about how politics is likely to drive a potential impeachment of Donald J. Trump. Well, the House of Representatives impeached the president on a virtual party-line vote and the Senate is now going to put him on trial.

The outcome will be decided, yep, on party lines.

Which brings up this point: Are senators free to vote their “conscience,” to base their decision solely on the evidence they have before them? Or must they worry what the folks back home think of what they are about to do?

Sen. Jones, who is running for re-election next year after narrowly defeating a Republican opponent, is facing the Mother of All Political Quandaries. Does he vote to convict Trump on obstruction of Congress or on abuse of power and face the wrath of Alabama voters, most of whom support the president? Or does he challenge them by declaring that he has voted to convict based on what he has seen and heard?

I believe Jones wants to keep his Senate seat. I also believe he is, as most pundits have posited, the most vulnerable Senate Democrat facing re-election this year. I don’t know much about Jones. I don’t know what makes him tick. I cannot measure his political courage. I don’t know if he’s a “maverick,” a loyal party guy or someone who wants to cover his own backside at any cost.

This is what I mean when I mention how politics runs head first into the quest for justice in matters of impeaching a president. Politics clearly is keeping Republicans from bucking their own partisan interest; it also is keeping most Democrats in line as well.

We have sticky wickets. Then we have matters such as this.

I believe Sen. Jones is going to lose some sleep over this one.