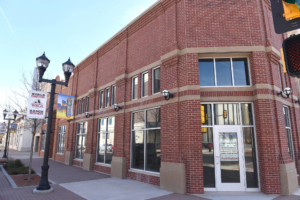 With all the success enjoyed this past spring and summer by Amarillo’s newly installed AA minor-league baseball team, I had hoped to be able to cheer for the stampede of new business filling up ground-floor storefronts at the parking garage across the street from the ballpark where the Sod Poodles play the Grand Old Game.

Alas, no cheering … at least not just yet.

The parking garage does have a tenant, or so I understand. Joe Taco, the (somewhat) upscale Mexican restaurant is moving into the garage; for all I know, perhaps Joe Taco has made the move.

The rest of the structure, though, appears to remain dark.

The idea was for the ballpark to act as fairly quick lure for businesses looking to profit from all the ballpark activity associated with the Amarillo Sod Poodles. The Sod Poodles played to packed houses at Hodgetown throughout their initial Texas League season.

None of this concern over the lack of parking-garage activity is intended to suggest gloom and doom for the structure. I remain optimistic that the garage investment will pay off. It just might be that the planners and economic gurus perhaps oversold the immediate result that the Sod Poodles would produce once they began their season in Amarillo.

The city’s changing downtown landscape remains a work in progress. So far, the work I have seen suggests that progress is going to follow in due course.