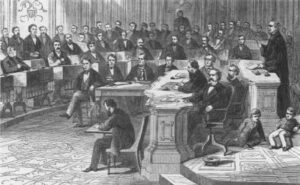 My friends on the left — those who, as I do, support the impeachment of Donald Trump — will not like what I am about to say. They will accuse of me invoking that “both-siderism” mantra.

Fairness dictates that I say it. So, here goes.

Senate Majority Leader Mitch McConnell and many of his Republican acolytes deserve the criticism they are receiving for their unwillingness to look at all the evidence before deciding to find Trump not guilty of the transgressions that the House of Representatives will send to them.

However, those on the other side — the individuals who have decided to convict the president — are guilty of being as close-minded as those across the aisle.

I have heard countless Democratic senators say the same thing that McConnell and Sen. Lindsey Graham and other GOP senators have said, which is that they have seen enough already to make up their minds.

All 100 senators are going to take an oath when the Senate trial commences. The oath will pledge them to look with impartiality and without bias at all the evidence they will hear when the House managers and Trump’s legal team present their cases.

I am willing to concede that I have seen and heard enough to make up my own mind. Then again, I am not among the 100 Senate “jurors” who will take that oath. I am free to state my own bias, my own view and offer my own conclusion.

U.S. senators don’t have that luxury. For them, be they Democrat or Republican, to declare their intention before hearing a single word of testimony in a Senate trial is, shall we say, a violation of the oath they will take.

The irony is that they will sit in judgment of a president who’s been accused of doing the very same thing.

One thought on “What about the other side?”