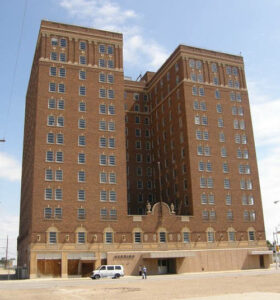 Let me reaffirm what I believe should happen regarding the fate of a long-vacant structure on the outskirts of downtown Amarillo, Texas.

While developers and investors spruce up other dilapidated structures in the city’s central business district, the Herring Hotel sits there quietly. Its owner, Bob Goodrich, has been seeking some interest in the building for the many years he has been paying taxes on it.

I believe it is time for the city’s power structure — which doesn’t own the building, but which is heavily involved in approving incentives for other property downtown — to deliver the details on what it believes is hindering the Herring Hotel’s possible rebirth.

A number of agencies operating under the city’s umbrella have been involved in some level with negotiations regarding the Herring Hotel. I refer to the Tax Increment Reinvestment Zone, Center City, the Amarillo Economic Development Corporation, senior city administrative staff, the Convention and Visitors Council, the Chamber of Commerce. Am I missing anyone?

Well, whatever. The city would be well-advised to offer some sort of statement to the public as to what is happening or not happening with the Herring Hotel. It’s been vacant since the 1970s. The Herring used to serve as the go-to site for practically every social event of consequence in Amarillo. Then it was closed up.

I haven’t been intimately involved in the Herring’s story, but I do know the owner. I am aware of several near misses regarding efforts to land investors who would pour money into reviving the structure.

With all the attention being paid to buildings such as the Barfield, the Rule, the Santa Fe, the Potter County Courthouse, the Kress, the Fisk — not to mention the relocation of several businesses along Polk Street — the Herring just sits there!

I believe there are some details about the future of the Herring that ought to be aired out. Is anyone listening at City Hall?

One thought on “Come clean on the Herring Hotel: Go or no go?”