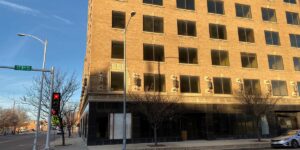 Now it’s the Rule Building, another long-vacant office structure, that’s getting new life as what they call a “boutique hotel.”

Who in the world knew?

According to www.newschannel10.com: “It was a natural progression for us to look at another opportunity. Especially with the growth and revitalization of Downtown Amarillo, we’re really hitting full stride right now, and it was an easy decision for us,” said Todd Harmon, vice president of development for DJ Investment Realty.

OK, before we pop the champagne corks and start a whole round of back-slapping, I want to offer a word of caution.

Even though I do not know Todd Harmon, I am aware of some hiccups that have occurred on projects he has sought to bring to fruition in downtown Amarillo. The Barfield Building is the most prominent of them. Harmon sought investors for the Barfield, but couldn’t make it happen. The building eventually was sold to another party and — voila! — it, too, is being turned into a boutique hotel slated to open in the spring.

I wish Harmon well. I hope he can turn the Rule Building into something beautiful. I want nothing but the very best for the downtown district in Amarillo, where my wife and I lived for more than 20 years before we relocated to the D/FW Metroplex.

As KFDA reports: As of right now, the structure plan consists of eight floors, 110 rooms, a 10,000 square foot banquet space, and a couple of restaurant and dining areas.

Don’t misunderstand me. I hope Harmon pulls this together. I want the project to succeed. I am hopeful that Amarillo’s future is still hurtling toward renewed prosperity. The city’s downtown district has made huge strides in the past half-dozen years.

I am going to offer cautious optimism that the Rule Building is part of that shiny new future.