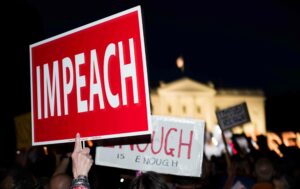 You bet that those numbers released this morning from the U.S. Labor Department are pretty darn stellar.

We added 266,000 jobs to our private payrolls in November; unemployment ticked down to 3.5 percent, retaining a full-employment ratio in the work force.

Those are impressive figures, as Donald Trump will tell us. “It’s the economy, stupid,” he tweeted this morning, using a phrase made famous by Bill Clinton campaign guru James Carville in 1992.

Let’s wait, though, for yet another suggestion from the president that will declare, “You cannot impeach me. Look at the job I’m doing to boost the economy! The economy is going too well for you to impeach me!”

It has everything to do with other matters relating to how he has abused the power of his office to solicit a foreign government to help him win re-election. The articles of impeachment that will come from the House will speak to that abuse of power, perhaps to obstruction of justice or to obstruction of Congress.

The economy? It won’t be mentioned anywhere in those articles.

So, Mr. President, you may stop referencing the economy in the context of impeachment. It’s a non-starter.