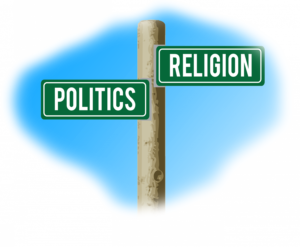 A social media meme is making the rounds calling for the elimination of religion from the world of politics.

I should add my own description: I mean “secular” politics.

Donald Trump’s re-election bid is likely to be fueled in good measure by the support he continues to have among evangelical voters who, for the life of me, cling to rear bumper of the clown car with Trump at the wheel. Why they continue to hang onto this guy’s message — such as it is — is beyond me.

However, religion in my mind has its place when discussing certain aspects of certain issues. I get the religious element to issues such as abortion, prayer in public places, same-sex marriage. I listen to those arguments and will argue my own point of view, which normally conflicts with the evangelical views on the issues I have just listed.

Then we have those on the right and the far right who continue to insist that they support political candidates on the basis of their faith. More to the point, they make judgments on candidates’ fealty to the New Testament, or whether they are devout enough in their Christian faith, or whether they worship God at all, or whether they adhere to faiths other than Christianity.

Indeed, this is where Trump’s support among evangelical voters would seem to break down, except that it doesn’t, again for reasons that escape me.

The U.S. Constitution states specifically and categorically that there should be “no religious test” applied to officeholders or those who seek to hold public office. The founders were as categorical on that subject as they were on practically any principle they wrote when building the nation’s governing framework.

And, yes, the Declaration of Independence, written 13 years before the Constitution was ratified, does refer to “God” and “the Creator.” They left it to the authors of the Constitution to develop a secular governing document which they wrote precisely that way to steer clear of injecting religious policy into the laws of the land.

So, as this campaign gets wound up and as we start heading down the campaign trail toward the White House, it is my fervent hope we can make our judgments on candidates’ fitness for the office without seeking to determine whether they are holy enough in their principles.

That’s what I want, so help me God.