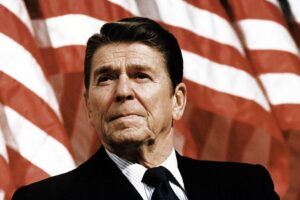 A social media post commemorating the election 39 years ago today of Ronald Reagan as our nation’s 40th president prompted me to wonder: How would President Reagan fare in what passes today as the Republican Party?

My hunch? Not well.

I will stipulate that I did not vote for Reagan in 1980 or in 1984. He won both elections in historic landslide proportions.

Most of all, though, he detested communism and the governments that promote what he considered to be an “evil” philosophy.

That brings me to the point of this blog: President Reagan would be aghast and appalled at Donald Trump’s flirtation with the direct descendants of the Evil Empire, aka the Soviet Union.

I get that Reagan met with Soviet leader Mikhail Gorbachev and forged a partnership of sorts with him. However, the president never took his eye off the threat that the USSR posed to us militarily.

I also am trying to picture a moment where Ronald Reagan would declare in public that he trusted the word of a Soviet leader over the word of our nation’s intelligence experts. Suppose the CIA had determined that the Soviets had attacked our election in an effort to influence its outcome … and that the intelligence network had blamed the Soviets for its all-out attack on our electoral system. Who do you think Reagan would believe, our spooks or the commies?

You know the answer. Thus, for Donald Trump to pretend to be a Republican who endorses traditional Republican policies regarding our nation’s adversaries is, well, laughable on its face.

Except that no one should be laughing.

Today’s Republican Party bears no resemblance to The Gipper’s GOP. It has been hijacked by a flim-flam artist, a charlatan and a fraud. To that extent, Donald Trump makes me actually miss President Reagan.

Imagine that. I know. It’s weird.