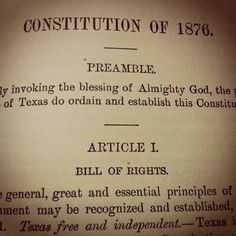 I am no fan of the Texas Constitution. I don’t like having to vote on amendments every other year. I don’t believe the Constitution works as well as it would work if it were modeled more like the U.S. Constitution.

I’ll give you an example of what I mean.

On Tuesday, those few Texans who bother to vote will get to decide on a constitutional amendment that has no real meaning. It would make it more difficult to enact a personal income tax in Texas. Here’s the deal: We already have an amendment to the Texas Constitution that requires voters to approve a state income tax. The proposed amendment on the Tuesday ballot makes it more difficult for the Legislature to refer a state income tax to voters for their approval or likely rejection.

What’s more, the amendment already on the books was enacted after an earlier Legislature approved a law requiring a statewide vote to approve a state income tax.

Texans will decide the fate of 10 Texas constitutional amendments all told.

This is an absurd way to govern a state as huge, diverse, modern, cosmopolitan and sophisticated as Texas.

The 1876 Texas Constitution has been saddled with roughly 700 amendments. They all have gone to the voters for their approval. Except that constitutional amendment elections — which occur every odd-numbered year after the Legislature adjourns in May — usually draw paltry voter turnouts. By “paltry” I mean, well, dismal, abysmal, minuscule. These elections usually do not reflect rank-and-file Texans’ view of the proposed amendments. We need to do a much better job of boosting voter turnout … but that’s another story for another day.

The state came close to changing the Texas governing document. There was a serious move toward convening a constitutional convention in 1974. It collapsed.

The federal Constitution has been amended just 27 times. Congress refers amendments to the states, which then charge their legislative assemblies with the task of ratifying the amendment. If three-fourths of the states’ legislatures ratify the amendment, it gets added to the U.S. Constitution.

The Texas Constitution was the product of a government principle that didn’t trust the Legislature to enact certain laws without an endorsement of voters. It’s a creaky document that seems beyond antique as we prepare to commence the third decade of the 21st century.

Will the Legislature ever find the will to tackle serious reform of the Texas Constitution? Oh, probably not in my lifetime. I just want to put it on the record that I believe a major Texas governmental makeover is long overdue.