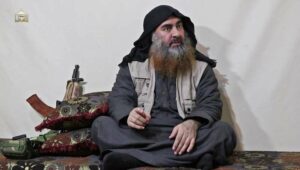 While the world digests the death of Abu Bakr al-Baghdadi at the hands of U.S. Delta Force and CIA commandos, it is grappling with what the Islamic State leader’s death means in the war against international terrorism.

I want to offer this perspective, which is that al-Baghdadi’s death won’t signal the end to the war against terrorists, let alone against the Islamic State.

It is my view at least that 9/11 signaled a new era in U.S. geopolitical activity that doesn’t appear to have an end anywhere in sight.

We’ve known for many decades that terrorists were out to “get” us. The 9/11 attack 18 years ago simply burst that awareness to the front of our minds. Al-Qaeda’s daring attack signaled to us all that we were perhaps more vulnerable than we ever thought.

So the war has commenced. I share the critics’ view that the war on terror has taken a bizarre turn at times, particularly with our invasion of Iraq in March 2003 and the misery that the Iraq War brought, given that Iraq had no connection with al-Qaeda, nor did it possess weapons of mass destruction.

However, the war on terror is likely to continue until the world no longer contains terrorists willing to die for the perverted cause to which they adhere.

In other words, we’ll be fighting this war forever.

Whether we fight at the level we have been fighting remains to be seen over the span of time. If 9/11 taught us anything it should have taught us that we cannot let our guard down for a single moment.