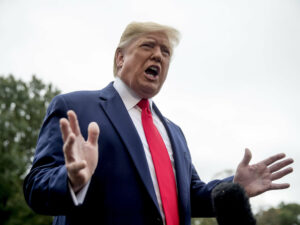 The Stable Genius who masquerades as president of the United States is leaving a bread-crumb trail that is leading straight toward impeachment by the U.S. House of Representatives.

Donald Trump today — in full view of the entire world — called on China and Ukraine to investigate Joseph Biden and his son, Hunter, over business dealings that Trump has characterized as “crooked.”

I need to mention that the elder Biden is running for the Democratic presidential nomination and might face off against Trump next year during the 2020 presidential election.

So, there you have it, loudly and clearly and with no ambiguity.

The president of the United States has solicited another foreign government to help him win re-election. Sound familiar? Well, yes. It does! He got that kind of help from Russia during his winning presidential campaign in 2016 against Hillary Rodham Clinton.

Man, on man. This guy is off his rocker.

He is now openly abusing the awesome power of his office for personal political gain. There can be no pretense. There can be no need to put “alleged” or “allegedly” in front of reports that Donald Trump has enlisted the aid of foreign governments.

This is astonishing, incredible, mind-blowing — just name it.

The idea that Trump would seek help from a authoritarian power such as China to investigate a U.S. citizen is utterly and completely beyond the pale.

If there is any doubt that the president deserves to be impeached for abusing his office, I believe he has just emptied the gasoline can over an already raging political wildfire.