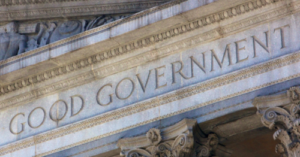 I consider myself to be a “good government progressive.”

Government should do the most good possible but it takes individuals on both sides of the political aisle to make it work as I believe our nation’s founders intended.

So … having laid that out, I fear we are about to enter an era of “no government” action aimed at helping Americans.

Impeachment now is clouding it all in Washington, D.C. Donald Trump is enraged at Democrats who want to impeach him for violating his oath of office. He says a phone conversation he had with the Ukrainian president was “perfect,” even though he asked his counterpart for foreign government assistance in getting re-elected and in digging up dirt on a potential 2020 opponent, Joe Biden.

House Speaker Nancy Pelosi has launched an “impeachment inquiry.” Trump is spending his days now firing off Twitter tirades and tantrums at his foes.

What does all this do for the cause of good government? It throws it into the crapper.

Democrats are enraged at Trump, too. The president, who doesn’t work well with Democrats under the best of circumstances, isn’t likely to work with them on anything now that House Democrats appear intent on seeking his ouster from office.

So, we’re going to pay our lawmakers a six-figure salary ostensibly to enact legislation, cast votes and send bills to the Oval Office for the president’s signature.

Except that none of that is likely to happen as House Democrats and Donald Trump play political chicken with each other.

Therefore, good government will vanish for the foreseeable future.