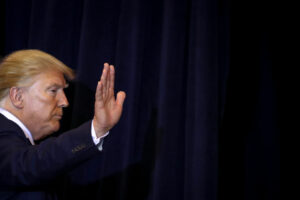 Mr. President, a recent tweet from you compels me to offer an answer.

You wrote this, which I want to share with readers of this blog: How do you impeach a President who has created the greatest Economy in the history of our Country, entirely rebuilt our Military into the most powerful it has ever been, Cut Record Taxes & Regulations, fixed the VA & gotten Choice for our Vets (after 45 years), & so much more?…

I have an answer.

A lot of folks in Congress — not to mention tens of millions of Americans — believe you are guilty of violating your oath.

You took an oath to defend the Constitution and to protect Americans against our enemies. Then this past summer you chatted up the Ukrainian president, who thanked you for the assistance you had given to his government’s struggle against the Russian aggressors. During that conversation, the Ukrainian head of state sought assurance that would provide arms to help Ukraine fight the Russians. You said, sure … but then you said had a favor to ask “though.” You wanted help with your re-election effort and you sought that help from a foreign government and you wanted that government to dig up dirt on a potential foe.

All that other stuff about the economy, the military, taxes, veterans issues, regulations have nothing to do with what we’re discussing.

Bill Clinton was impeached, too, because he lied to a grand jury about his dalliance with the intern. Meanwhile, the economy was rocking along; he worked with Congress to balance the federal budget. President Clinton was doing a good job, but Republicans impeached him anyway. Or don’t you remember that?

I don’t yet know how I feel about whether the House should proceed with impeaching you, Mr. President. I’m struggling with that one.

Here’s the deal, though: Impeachment has nothing to do with the job you are doing. Oh, I guess I should say that you are overstating your accomplishments. You forgot to mention pi**ing off our allies, failing on your promise to make Mexico pay for The Wall and the litany of insults and innuendo you have hurled at your foes.

But you did ask just how we could impeach a president who’s done all you claim to have done.

I hope I have answered it for you.

Mr. President, you have violated your sacred oath.