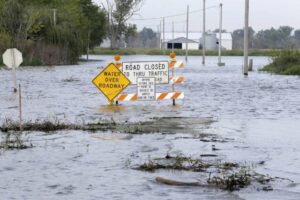 As we proceed southward toward The House in Collin County, we have seen evidence of the awesome power that Mother Nature can deliver to we mere human beings.

The Missouri River runs adjacent to Interstate 29 through Iowa and into Nebraska. We saw a flashing electronic sign that told us that I-29 would be closed; a detour awaited.

This leg of the journey was extended about 40 minutes.

What caused it? The Missouri River flooded. We didn’t see what it had done to the right-of-way. All we know river caused the state highway department to shut down the major thoroughfare.

But we damn sure did see the river. It is quite high at this moment. In places it is just a foot or two from spilling over its bank and onto the highway. We saw street signs below the Interstate that poked only a foot or two above the water. We noticed buildings half-submerged under the Missouri’s tides.

Grand Forks, N.D., had just gone through what apparently occurred downstream. We watched crews seek to siphon water from ditches into retention ponds.

There’s water. Then there’s too much water. We saw evidence of what happens when you have too much of it.

Yes, our friends along the Gulf Coast are experiencing this very thing at this moment. Our hearts go out them. They are in our prayers.

Now that we’ve seen how far widespread nature’s wrath has become, we send our prayers to those we saw from a distance as we zipped along to our next destination.