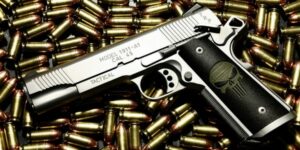 The Republican politician is standing behind an idea that would require background checks any purchase of a firearm in what is being called a “stranger-to-stranger transaction.”

The NRA doesn’t like it. One gun lobby official called it a “political gambit.”

My hunch is that the NRA is going to apply maximum pressure on Patrick if he continues to push on this baby-step notion that seeks to make it just a bit more difficult for individuals to buy a firearm from someone they do not know. Indeed, Patrick is likely fueled by the carnage that erupted in El Paso and Odessa, where 29 people died in slaughters in those two West Texas cities.

I appreciate some of the concerns about this matter, such as … how do you enforce it? Still, it seems to make sense to me.

The question for me at this moment, though, is whether Lt. Gov. Patrick — who presides over the Texas Senate — has the courage to stand up against the kind of political pressure the NRA is capable of applying.

I don’t generally support Dan Patrick. I don’t know him personally. I only know of him through his occasional strong-arming of Texas senators.

On this matter, I stand with him. I hope, therefore, he stands firm against the National Rifle Association.