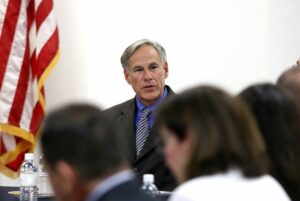 So, when I hear a politician say that “mistakes were made,” I think of my former editor — and current friend — and I see such a statement as a way of a politician seeking to cover his a**.

The basic difference between passive and active voice grammar is that the reader understands who is doing the deed being described in the text he or she is reading.

Texas Gov. Greg Abbott has said that “mistakes were made” in the release of a fundraising letter the day before the shootings in El Paso and Dayton. The letter sought to gin up support for efforts to “DEFEND” the Texas border against, I presume, illegal immigrants.

The letter went out and then a moron drove from Collin County to El Paso, Texas, and opened fire at a Walmart shopping center, killing 22 people, most of whom were of Latin American descent. Is there a connection? Maybe, perhaps.

As the Texas Tribune reported: “I did get the chance to visit with the El Paso delegation and help them understand that mistakes were made and course correction has been made,” he said.

The Tribune continued: “The national Democrat machine has made no secret of the fact that it hopes to ‘turn Texas blue.’ If they can do it in California, they can do it in Texas — if we let them,” Abbott wrote in the fundraising appeal.

The governor signed off with another pointed warning: “Unless you and I want liberals to succeed in their plan to transform Texas — and our entire country — through illegal immigration, this is a message we MUST send.”

I am left to ask: Who made the mistakes and what is the precise nature of the “course correction”?

I am quite certain my former editor, who has returned to Texas, will read that statement and go into apoplectic shock over Gov. Abbott’s passive-voice a**-covering.