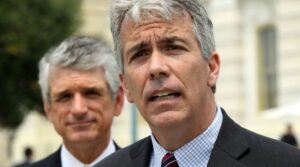 Joe Walsh hasn’t been in the public eye all that long, but his time in the spotlight has been fraught with, shall we say, uncomfortable moments.

The former Republican member of Congress has thrust himself back onto the stage with an announcement that he’s going to challenge Donald J. Trump for the Republican Party’s presidential nomination in 2020.

Does this TEA Party adherent stand a chance of wrestling the nomination away from the president? Ohhh, probably not.

However, the guy who now works as a right-wing talk show host could make this primary fight entertaining in the extreme.

Walsh served a term in the U.S. House. Then his district got redrawn in a way that favored Democrats. He sought to switch districts and then lost to Tammy Duckworth, who since has gone on to serve in the U.S. Senate.

Walsh, though, has been far from silent. Yes, he once spoke harshly against President Barack Obama, but has all but apologized for the intemperate language he used against Trump’s immediate predecessor.

In a way, though, it kind does my heart good to hear him say things many millions of us have been saying about the president since before he won the 2016 election.

He calls Trump unfit, frightening, incompetent, crass, callous, lacking in empathy. And this is from a Republican who once stood foursquare behind Donald Trump.

Joe Walsh isn’t exactly the kind of politician I want to see elected. He tilts too far the other way than I do. He was elected as a TEA Party advocate. I am not crazy about TEA Party candidates or officeholders.

However, he stands on a set of principles in which he believes strongly, which happens to be something that is foreign to Donald Trump, who doesn’t appear to have a single guiding principle other than what benefits him.

So, with that I wish former Rep. Joe Walsh well. Give POTUS the dickens. He deserves every lick he’s going to get.