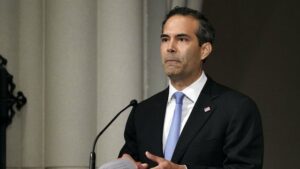 You might remember when the late President George H.W. Bush once spoke affectionately of his grandchildren, whose parents are Jeb and Columba Bush … and how he referred to them as “my little brown ones.”

Their mother is from Mexico and the president took some undeserved heat for his comments.

One of the “little brown ones” has grown into a Texas elected official, serving as land commissioner. George P. Bush, furthermore, has joined the chorus of those of us who decry what he calls “white terrorism” in the wake of the El Paso massacre that resulted in the deaths of 20 victims.

I want to applaud  George P. for his stance, as he is one of the few Republican politicians at this moment willing to stand up and say what now appears more evident than ever — that the shooter, also a Texan, who opened fire in the El Paso Wal-Mart store was stirred by virulent hatred of dark-skinned immigrants from Latin America.

Bush took to Twitter to make his feelings known. They lend an important voice to this ever-growing national debate.

“I believe fighting terrorism remains a national priority. And that should include standing firm against white terrorism,” Bush said.

He went on: “There have now been multiple attacks from self-declared white terrorist here in the U.S. in the past several months. This is a real and present threat that we must all denounce and defeat.”

Now, let’s all wait to hear from the nation’s top politician, the man at the top of the political food chain, the commander in chief, the head of state … and the apparent source of much of the hatred that has spilled out since he became president of the United States.