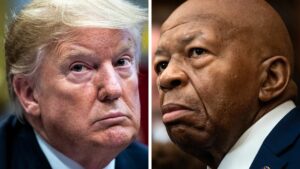 Donald John Trump won an election in 2016 to be president of the entire United States of America.

Why, then, can this individual say with a straight face that one of this country’s great cities in effect is not fit for human habitation?

The president has gone after U.S. Rep. Elijah Cummings, who represents a largely African-American congressional district in Baltimore, Md.

My memory at times fails me, but I am trying to remember ever hearing a president say the things that Trump has said about Baltimore. The very idea that he would chastise a community and its elected representatives using language such as what he used is reprehensible on its face.

He called Baltimore  a “rat- and rodent-infested” hell hole. No one should live there, he said. Why did he drag this issue into the sewer? Because Rep. Cummings, who has represented Baltimore for 23 years in Congress, has criticized the president’s policies. Trump responded by calling Cummings a “racist.” Of course, he repeated the idiotic mantra that he is the “least racist person” on Earth, which to my ears is the kind of thing that comes from the mouths of people with racist intent.

I simply cannot tolerate a president who denigrates communities in the manner that Donald Trump has done. He has castigated the leadership in cities such as San Francisco, Los Angeles, Chicago, New York and now Baltimore. What do they have in common? They’re all governed by politicians who disagree with Trump.

They also have something else in common. They all are part of a nation governed by the individual who has heaped insults on them.