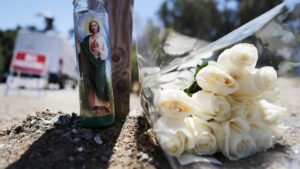 When gun violence erupts in this country, Americans naturally get drawn into the ongoing debate over how to stem the scourge of such insane acts.

Now, though, the issue has crossed another issue line of demarcation.

How would building a wall along our nation’s southern border stop home-grown terrorists from erupting?

A corn-fed young American man killed three people at a food festival in Gilroy, Calif.; one of the victims was a 6-year-old boy, another was a teenage girl. Twelve more were injured in the melee. The shooter — whom the police shot to death — was not from south of the border. He wasn’t a Mexican gang member, nor did he hail from Central America. The shooter was far from the kind of individual that Donald Trump once said is being “sent” into our country “by Mexico.”

This lunatic was one of ours. He was one of us. He was just like any one of the other home-grown idiots who decide to open fire with an “assault weapon.”

These political calculations are becoming too complex for many of us. Count me as one who is getting mighty confused over how to handle this latest tragedy.