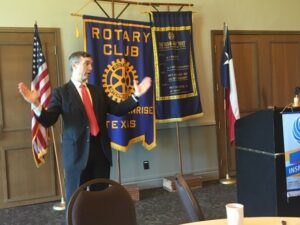 I am quite certain that when U.S. Rep. Van Taylor finishes his time in Congress that he will have earned high marks from conservative watchdog groups and political action organizations.

That’s fine. It’s who he is. He also seems to be demonstrating an attitude that’s been missing in the halls of Congress for, oh, several decades. He wants to forge friendships, alliances and partnerships with his colleagues across the aisle.

Taylor came to the McKinney Sunrise Rotary Club this morning to make the case that “Congress is broken” and that it needs a few healing hands to repair it. The young man from Plano just might be what the doctor has ordered.

I was impressed with a small gesture he extended to someone who asked him a question, while addressing Taylor as “Congressman,” to which Taylor said, “You can call me ‘Van.’ I work for you. I am the employee here.” He took office just in January, succeeding a living legend in the House, Sam Johnson, also of Plano. More on Johnson in a moment.

The idea that Congress is broken isn’t exactly a “news flash,” Taylor said. “I am trying to build relationships with Democrats. Most bills I sponsor are bipartisan bills,” he said.

Taylor honed his bipartisan leanings serving in the Texas Senate, where he worked prior to being elected to the U.S. House. So he knows about certain rules that promote bipartisanship, such as the Texas Senate’s two-thirds rule that requires at least 20 members to consider legislation on the Senate floor.

He told us this morning that “the proudest day of my time in the Senate was when I got to introduce my congressman,” Rep. Johnson, whose story of heroism during the Vietnam War is legendary, to his  Senate colleagues. He was held captive as a prisoner of war for seven years in the “Hanoi Hilton,” after being shot down and was kept in solitary confinement for four of those horrific years.

Indeed, Taylor’s own military experience commends him well to serve in Congress. He was a Marine Corps intelligence officer. He was on active duty and was planning to leave the Marines while touring the Pentagon, a place he said he had never visited.

Then he watched the Pentagon burn on 9/11. He returned home to North Texas, served in the Marine Corps Reserves and was called up in January 2003 as the nation was preparing to go to war in Iraq. Taylor then served a year in Iraq after the shooting started in March 2003.

So, this newcomer to the Big Show wants to do well. He wants to get things done. He knows the system on Capitol Hill is in bad shape. It needs repair. Taylor acknowledges that Texas congressional Republicans meet regularly with each other, but also wants to further the outreach to include Texas congressional Democrats.

I wish Van well in his search for common ground.