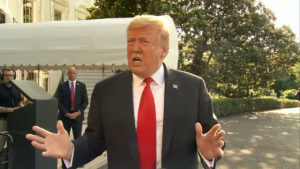 Am I allowed to change my mind, to suggest that the evidence now has reached a form of critical mass that qualifies as an “impeachable offense”?

Of course I am!

I believe it has arrived in the form of an interview that Donald Trump granted ABC News anchor George Stephanopoulos in which the president said he would accept negative information on a political foe from a foreign government.

Bingo, bango! There you have it. The president then said the “FBI director is wrong” when he said just a month ago that anyone who gets that kind of “opposition research” should report it to the FBI. How does it feel, Christopher Wray, to take a shiv straight in the back?

House Speaker Nancy Pelosi has been fervent in our belief that impeachment is not in the cards, at least not until there is compelling evidence of wrongdoing. Well, it might that the president has provided it that evidence with his reckless pie hole spouting off how he would do precisely what has been alleged that he did during the 2016 election: that he would use information on a foe provided by a hostile foreign power.

I had stood with the speaker in her resisting calls for impeachment.

Today, after digesting what I have heard from POTUS, I am having second thoughts.

This is a dangerous man serving as our head of state.

One thought on “POTUS gives foes the ammo they now need to, um, impeach”