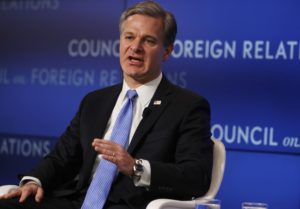 Even though Donald Trump and his grifter son-in-law, Jared Kushner, continue to downplay the threat Russia poses to our electoral system, FBI director Christopher Wray is telling us something profoundly different.

I choose to heed the words of Christopher Wray.

Wray calls the Russian threat a “365-days-a-year threat. And that has absolutely continued.”

The Russians are the baddest of a whole cast of bad actors.

Donald Trump just can’t bring himself to say it out loud. Neither can Kushner, who recently said that Robert Mueller’s investigation into alleged “collusion” posed a greater threat to our democratic system than “a couple of Facebook ads.”

Memo to Kushner: Shut your mouth. And to Trump? Start defending our Constitution, which you pledged to do when you took the presidential oath.

The FBI director is among the cadre of national intelligence and counterterrorism experts who have confirmed what all of us know: The Russians are chiefly responsible for the cyber attack on our system. Mueller said so, too, in his voluminous report on collusion and obstruction of justice.

It simply amazes me that Donald Trump could appoint such a serious grownup to be FBI boss after firing another adult, James Comey. I’m glad he did give Christopher Wray this platform. What’s more, I am delighted to hear the FBI boss use that platform to speak the truth about what he believes happened in the 2016 presidential election, the 2018 midterm election and what likely will occur when we go to the polls again in 2020.

If only the commander in chief would pay attention.