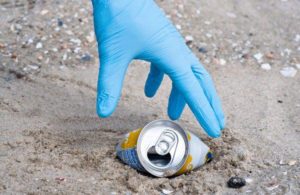 SEA RIM STATE PARK, Texas — Dang it, anyhow! I missed the chance today to visit with volunteers who flocked to this part of the Texas Gulf Coast to take part in an annual beach cleanup event.

My wife and I had a brunch date with friends. When we returned to our RV camp site, the Gulf of Mexico was at high tide, splashing all the way to the beach grass bordering the sand. The volunteers were gone.

But I want to offer a good word to the Texas General Land Office for continuing the program that began in 1986.

“The Adopt-a-Beach annual spring cleanup is always an amazing turnout for Texans to join together and volunteer their time to keep our Texas beaches beautiful. What better way to serve our great state than by spending the day at the beach? It is because of our wonderful volunteers that our annual spring cleanup provides the Texas coast with the care it deserves. The dedication of our fellow Texans to help keep our coast in pristine condition never ceases to amazes me,” said Land Commissioner George P. Bush.

I recall when the cleanup program began under the watch of one of Bush’s predecessors at the General Land Office. Garry Mauro had a vision and a drive to protect our state’s fragile coastline. He made coastal protection against erosion a top priority during his time as land commissioner. The cleanup was part of his overall strategy to emphasize coastal issues. I was a vocal and enthusiastic supporter of Mauro’s effort during my time as editorial page editor of the Beaumont Enterprise.

This policy matters to coastal states such as Texas. I am delighted to see Mauro’s initiative continue through successive land commissioners.

Mauro’s public life as a politician ended in 1998 when he got thumped by George P. Bush’s uncle, George W. Bush, who cruised to re-election as Texas governor over Mauro.

The effort to care for the state’s coastline remains one of Garry Mauro’s enduring legacies.