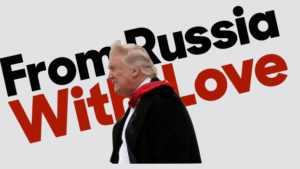 Donald Trump has been mounting a full-throated, frontal assault on the investigation into The Russia Thing by special counsel Robert Mueller III.

Yes, the president is attacking the probe as a “witch hunt,” and a “disgrace to our country.” Mueller reportedly concluded that the Trump presidential campaign did not “collude” with Russian goons who attacked our electoral system. It’s an open question on the issue of obstruction of justice.

But Trump keeps declaring he received “total exoneration” while piling on and on and on over Mueller’s exhaustive investigation.

I am left to wonder: Why doesn’t the president declare the Russian interference in our electoral process to be a “disgrace” to the nation? Where is the president’s alarm that the Russians were able and willing — according to Mueller — hack into our election data bases and seek to distribute false information about Hillary Clinton? Isn’t that what one would call “fake news”?

Oh, and then the Russians actually did launch their attack on the same day that candidate Donald Trump invited them to look for those missing e-mails that the Clinton team reportedly trashed. Isn’t that at least as much of a national “disgrace” as the Russian attack in the first place?

Trump’s disgraceful misrepresentation of “disgraceful” conduct continues to demonstrate fully to me that the man is unfit for public office of any sort, let alone as the president of the United States.

He impugns the integrity of Mueller, a former FBI director, a decorated Vietnam War combat veteran and a man known for meticulous preparation in the performance of his legal duties.

The “national disgrace” occurred not with the probe. It occurred when the Russians interfered in our cherished electoral system.

Where is the condemnation of that, Mr. President?