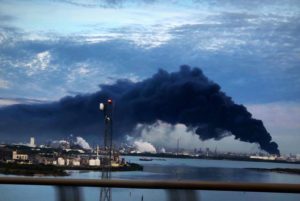 I’ll be candid. I never have considered Texas Attorney General Ken Paxton to be much of an environmental watchdog, let alone an activist.

So, what does the top state Republican legal eagle do? He files a lawsuit against a Houston company that owns a storage terminal that erupted in flames, pouring tons of chemicals into the air.

Intercontinental Terminals has been slapped with a lawsuit over the fires that detonated at its suburban Deer Park storage units. It has closed the Houston Ship Channel, one of the world’s busiest international shipping waterways. The fires have contaminated the air, pouring clouds filled with cancer-causing benzine.

The suit was filed on behalf of the Texas Commission on Environmental Quality. It alleges that Intercontinental Terminals has filed the Texas Clean Air Act.

The company faces the possibility of stiff fines if the AG wins his lawsuit.

Environmental groups are cheering the attorney general on. I want to join them, even though it does surprise me.

Paxton was a GOP legislator from Collin County before he got elected as AG in 2014. He was re-elected to a second term in 2018. He’s had a bit of legal trouble, facing a probable trial on securities fraud later this year. But that’s another story.

I find his lawsuit to be a fairly refreshing and pleasant surprise.

The Deer Park fires have been buggers to extinguish. They have blackened the sky along the Gulf Coast. They have put thousands of Texans’ health at risk.

I stand with AG Ken Paxton in seeking justice.